All About Rocklin California

Rocklin is a city in Placer County, California located approximately 22 miles (35 km) from Sacramento, California, and about 6.1 miles (9.8 km) northeast of Roseville in the Sacramento metropolitan area. Besides Roseville, it shares borders with Granite Bay, Loomis and Lincoln. As of the 2010 census, Rocklin’s population was 56,974.

Prior to the California Gold Rush the Nisenan Maidu occupied both permanent villages and temporary summer shelters along the rivers and streams which miners sifted, sluiced, dredged and dammed to remove the gold.Explorer Jedediah Smith and a large party of American fur trappers crossed the Sacramento Valley in late April, 1827. The group saw many Maidu villages along the river banks. Deprived of traditional foodstuffs, homesites and hunting grounds by the emigrants, the Nisenan were among the earliest California Indian tribes to disappear.

During the 1850s, miners sluiced streams and rivers including Secret Ravine which runs through Rocklin. The piles of dredger tailings is still obvious today, between Roseville and Loomis southeast of Interstate 80. Secret Ravine at the area now at the intersection of Ruhkala Road and Pacific Street was later mined for granite, some of which was used as the base course of the California Capitol Building in Sacramento, although the earliest recorded use of the rock was for Fort Mason at San Francisco in 1855.The granite was hauled out by ox carts before the arrival of the railroad many years later.

In 1860, the U.S. Census counted 440 residents in the area of Secret Ravine, of which approximately 16% had been born in Ireland and the majority of whom worked as miners.The area was referred to as Secret Ravine or the “granite quarries at the end of the tracks” as late as 1864.

Rocklin’s history is closely tied to the transcontinental railroad. In 1862, the Pacific Railroad Act granted the Central Pacific Railroad land near Secret Ravine. In 1864, the Central Pacific Railroad completed an extension of its track southwest from Newcastle to Secret Ravine. It named the area Rocklin after its granite quarry, and used the site as a refueling and water stop. The Central Pacific built a roundhouse in 1867. The transcontinental railroad was completed in 1869, significantly increasing railroad traffic through the town. According to the 1870 census, Rocklin had grown to 542 residents, and the majority of Irish immigrants had foregone mining and were working for the railroad.In 1906 the Central Pacific moved its facility from Rocklin to Roseville, where more land was available for expansion. The site in Roseville has remained in continuous use since. As of August 2014, it is the largest rail facility near the US West Coast.

In 1869 a group of laid-off Chinese railroad workers moved to Secret Ravine to mine and raise vegetables which they sold locally. They were driven out during the anti-Chinese pogrom of September 1876, but the area is still known as China Gardens.

Rocklin has a hot-summer Mediterranean climate (Köppen Csa) that is characterized by cool, wet winters and hot, dry summers. Summer months are hot, with an average July high of 94 °F (34 °C) and rainless for the most part. Winter months, on the other hand, are cool with a December average of 47 °F (8 °C) and give way to plenty of rain. Rocklin very rarely sees any snow accumulation. The degree of diurnal temperature variation varies greatly depending on time of year. It ranges from only 14°F in January to 33°F in July.

There were 13,258 households out of which 42.6% had children under the age of 18 living with them, 62.3% were married couples living together, 9.4% had a female householder with no husband present, and 24.5% were non-families. 18.7% of all households were made up of individuals and 6.3% had someone living alone who was 65 years of age or older. The average household size was 2.74 and the average family size was 3.15.

Granite mining ended in 2004 in Rocklin. Now, top Rocklin employers include large multinational corporations, retail outlets, education and government. As of April 2016, Rocklin had an estimated civilian work force of 30,100 with an unemployment rate of 4.4%. Approximately 40% of Rocklin citizens over age 25 hold a bachelor’s degree or higher.

Shopping, entertainment and dining can be found in the Blue Oaks Town Center, a regional shopping center anchored by national tenants, located on the Highway 65 corridor, as well as Rocklin Commons and Rocklin Crossings along Interstate 80. There is a section of Granite Drive along Interstate 80 known as Toy Row, with high-end auto dealerships, RV and Boat retailers, and there is also a local antique mall. Rocklin Hacker Lab is a collaboration between Hacker Lab and Sierra College. It is an incubator, co-working, hacker and maker space with classes and meetups daily.

The city has four districts with distinct architectural guidelines: The University District, Granite District, College District, Quarry District. Each District will ultimately create a unique environmental atmosphere and character, defined geographically based on land use, transportation, and natural features.

The Government of Sacramento operates as a charter city (as opposed to a general law city) under the Charter of the City of Sacramento. The elected government is composed of the Sacramento City Council with 8 city council districts and the Mayor of Sacramento, which operate under a mayor-council government.

In addition, there are numerous departments and appointed officers such as the City Manager, Sacramento Police Department (SPD), the Sacramento Fire Department (SFD), City Clerk, City Attorney, and City Treasurer.

In the United States House of Representatives, Sacramento forms the majority of the California’s 6th congressional district, represented by Democrat Doris Matsui.

Interstate 80 and State Route 65 intersect in Rocklin, and historic U.S. Route 40 runs through town. The Rocklin (Amtrak station) is served by the Capitol Corridor and the California Zephyr routes. 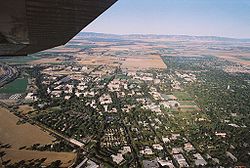 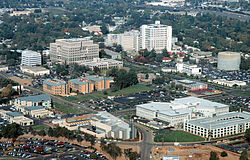 The main campuses of the University of California, Davis are in Davis, California (top) and Central Sacramento (bottom). 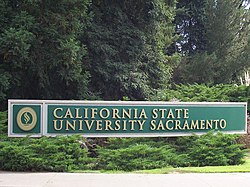 Sacramento State University is one of the best ranked universities on the West Coast.

The McGeorge School of Law of the University of the Pacific is a law school in the Oak Park neighborhood.

Sacramento is home to Sacramento State (California State University, Sacramento), founded as Sacramento State College in 1947. In 2004, enrollment was 22,555 undergraduates and 5,417 graduate students in the university’s eight colleges. The university’s mascot is the hornet, and the school colors are green and gold. The 300 acres (1.2 km2) campus is located along the American River Parkway a few miles east of downtown.

The University of California has a campus, UC Davis, in nearby Davis and has a graduate center in downtown Sacramento. The UC Davis Graduate School of Management (GSM) is near the UC Davis Medical Center off of Stockton Boulevard near Highway 50. Many students, about 400 out of 517, at the UC Davis GSM are working professionals and are completing their MBA part-time. The part-time program is ranked in the top-20 and is well known for its small class size, world class faculty, and involvement in the business community. UC also maintains the University of California Sacramento Center (UCCS) for undergraduate and graduate studies. Similar to the UC’s Washington, D.C., program, “Scholar Interns” engage in both academic studies and as well as internships, often with the state government. The UC Davis School of Medicine is located at the UC Davis Medical Center between the neighborhoods of Elmhurst, Tahoe Park, and Oak Park.

The Los Rios Community College District consists of several two-year colleges in the Sacramento area—American River College, Cosumnes River College, Sacramento City College, Folsom Lake College, plus a large number of outreach centers for those colleges. Sierra College is on the outskirts of Sacramento in Rocklin.

University of the Pacific has its Sacramento Campus in the Oak Park neighborhood of Sacramento. The campus has long included McGeorge School of Law and in 2015 was expanded to become a comprehensive graduate and professional campus, including programs in analytics, business, education, health sciences, and public policy.

Epic Bible College and the Professional School of Psychology are also based in Sacramento. Western Seminary has one of its four campuses in Sacramento, which opened on the campus of Arcade Church in 1991. Western is an evangelical, Christian graduate school that provides theological training for students who hope to serve in a variety of ministry roles including pastors, marriage and family therapists, educators, missionaries and lay leadership. The Sacramento campus offers four master’s degrees, and a variety of other graduate-level programs.

The Art Institute of California – Sacramento was established in 2007, and is a branch of The Art Institute of California – Los Angeles. The school is focused on educating students in the field of commercial arts. The school offers both a Bachelor of Science and an Associate of Science degree, as well as diplomas in some areas of study. Some majors the school offers are Digital Film-making & Video Production, Culinary Management, Graphic Design, and Game Art & Design.

On J Street, there is the Lincoln Law School of Sacramento, a private, evening-only law school program with a strong legal presence in the region.

The Universal Technical Institute (UTI) is in Sacramento; it offers automotive programs in auto mechanical, auto body, and diesel. 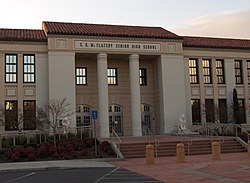 While Roman Catholic institutions still dominate the independent school scene in the Sacramento area, in 1964, Sacramento Country Day School opened and offered Sacramento citizens an independent school that is affiliated with the California Association of Independent Schools. SCDS has grown to its present-day status as a learning community for students from pre-kindergarten through twelfth grade. Additionally, the suburb of Fair Oaks hosts the expansive riverside campus of the Sacramento Waldorf School, a Steiner school adjacent to the Rudolf Steiner College, and the largest Waldorf school in North America. Sacramento Waldorf School educates students from pre-K through 12th grade on a secluded, pastoral site that incorporates a large, functioning biodynamic farm.

There is one Islamic school in Sacramento, Masjid Annur, founded in 1988.

Sacramento is home to one major league sports team — the Sacramento Kings of the National Basketball Association. The Kings came to Sacramento from Kansas City in 1985. On January 21, 2013, a controlling interest of the Sacramento Kings was sold to Chris Hansen, who intended to move the franchise to Seattle for the 2013–2014 NBA season and rename the team the Seattle SuperSonics. Sacramento Mayor Kevin Johnson fought the move, forming an ownership group led by Vivek Ranadive to keep the Kings in Sacramento. On May 16, 2013, the NBA Board of Governors voted 22–8 to keep the Kings in Sacramento.

Sacramento has two other professional teams. Sacramento Republic FC began play in April 2014 at Hughes Stadium before a sellout crowd of 20,231, setting a USL Pro regular-season single game attendance record. They now play in Papa Murphy’s Park. The Republic FC won the USL championship in their first season. In 2000, AAA minor league baseball returned to Sacramento with the Sacramento River Cats, an affiliate of the San Francisco Giants and formerly an affiliate of the Oakland Athletics. The River Cats play in Raley Field, in West Sacramento.

Sacramento is the former home of two professional basketball teams. The Sacramento Heatwave of the American Basketball Association previously played in the Sacramento area until 2013. Sacramento was also formerly home to the now defunct Sacramento Monarchs of the WNBA. The Monarchs were one of the eight founding members of the WNBA in 1997 and won the WNBA Championship in 2005, but folded in November 2009.

Sacramento has frequently hosted the NCAA Men’s Outdoor Track and Field Championship as well as the 1st and 2nd rounds of the NCAA Men’s Division I Basketball Championship. The California International Marathon (est. 1983) attracts a field of international elite runners who vie for a share of the $50,000 prize purse. The fast course is popular for runners seeking to achieve a Boston Marathon qualifying time and fitness runners.

Get An Automated Value Of Your Home In 2-Minutes
Click Here!!